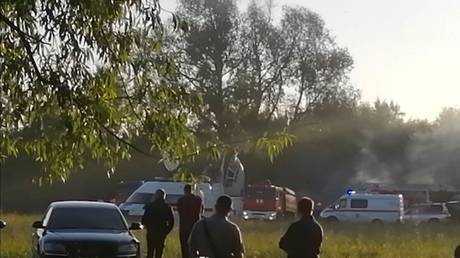 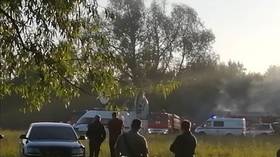 Several crew members have been killed after an Ilyushin Il-76 transport aircraft crashed on Friday morning near the city of Ryazan in central Russia, some 200 kilometers southeast of Moscow.

Initial reports indicated there were nine or 10 people on board. At least two of them died while six survivors were rushed to local hospitals, according to Russian media reports citing emergency services.

Multiple pictures and videos circulating on social media indicated the crashed jet was an Ilyushin Il-76, but authorities have yet to confirm whether it was a civilian or a military aircraft.

There were no reports of injuries or damage to infrastructure on the ground, as the plane apparently went down in a field near a freeway. The blaze was swiftly brought under control as multiple fire crews and ambulances were seen responding to the crash.

Some unconfirmed reports alleged that the plane crashed and caught fire soon after takeoff from Ryazan, where it had made a stopover for refueling en route from the city of Orenburg, near the border with Kazakhstan, to the city of Belgorod situated along the Ukrainian border.

Intel has postponed the groundbreaking ceremony for its new semiconductor manufacturing... Is There Medicine Growing in Your Backyard?

By Jeremiah Johnson Are there medicines in your backyard? Absolutely, but to determine...

Zombie Cells” May Be Aging You

The average American begins to feel “old” at the age of 47. Oftentimes in our 30s...

Advertisement A fireplace can be an excellent addition to a modern home. It creates...