Today is the Mid-Autumn Festival. This is an important traditional Chinese festival. It is the fifteenth day of the eighth lunar month of each year (今天是中秋节。 这是中国重要的传统节日。 为每年的农历八月十五。 jīn tiān shì zhōng qiū jié. zhè shì zhōng guó zhòng yào de chuán tǒng jié rì. wèi měi nián de nóng lì bā yuè shí wǔ). Whenever you ask someone from China to describe this holiday, it’s a guarantee they will tell you all about moon cakes (月饼 yuè bǐng). In this post, we’ll learn about this traditional snack, but first here’s a little information on the holiday itself. Image by a2004b12c17 from Pixabay An Intro to Mid-Autumn Festival The Mid-Autumn Festival is one of the oldest holidays in China, dating back 3,000 years to the Shang Dynasty (商朝 shāng cháo). Mid-Autumn first appeared in the Rites of Zhou (中秋最早出現于周禮。 zhōng qiū zuì zǎo chū xiàn yú zhōu lǐ). This was one of three ancient texts listed among the classics of Confucianism. The festival became more popular in the following Tang Dynasty (唐朝 táng cháo), as people celebrated the harvest moon and the bounties it brought. During the Song Dynasty (宋朝 sòng cháo), an official holiday was established. Later on during the Ming and Qing (明清 míng qīng) period, it became one of the most important festivals in China. As is the case with most Chinese holidays, there’s an interesting legend behind the Mid-Autumn Festival. You can read about it in this post I wrote a few years back: A Guide to the Mid-Autumn Festival For a great listening and reading exercise, I also recommend checking out this new video from Crazie Laoshi. She details the legend behind the holiday, speaking slowly and clearly along with subtitles featuring both characters and pinyin: [embedded content] Despite its long history and importance in Chinese culture, Mid-Autumn Festival wasn’t an official public holiday until 2008. This happened after the Chinese government decided to give up on the idea of having Labor Day become a 3rd “Golden Week” (黄金周 huáng jīn zhōu). They shortened that and added three more one-day holidays, all of them ancient festivals. In addition to Mid-Autumn, they added Tomb Sweeping Day (清明节 qīng míng jié) and Dragon Boat Festival (端午节 duān wǔ jié) to the holiday calendar. This fall harvest festival always falls somewhere between mid-September and early October on the eve of a bright full moon (圆月 yuán yuè) and it’s all about gathering the family together for a reunion (团圆 tuán yuán) and gazing at the moon. Of course, since it’s such a short holiday (only one day) many people can’t make it home to be with family members (家人 jiā rén). Home or not, you can stare up at the moon knowing that your loved ones are doing the same thing. In ancient times, people prayed to the moon for a good harvest. These days, however, most people celebrate the holiday by feasting on moon cakes. Speaking of those lunar delicacies, let’s learn more about them! Image by meongan278 from Pixabay Moon Cakes So what exactly are moon cakes? They are small, round pastries that are said to resemble the full moon. Moon cakes have many fillings, such as lotus seed paste, red bean paste, and five nuts (月饼馅料很多，有莲蓉、豆沙、和五仁。 yuè bǐng xiàn liào hěn duō, yǒu lián róng, dòu shā, wǔ rén). The latter refers to a filling composed of five different nuts or seeds, which varies from region to region. You know the festival is approaching when you start seeing the ads for moon cakes everywhere you go. For English teachers such as myself, Mid-Autumn Festival means receiving an ungodly amount of these lunar pastries from students. Some are downright awful, some are tolerable, and some are actually quite tasty. One thing’s for sure – not all moon cakes are created equal. To help school you before this big holiday and help you get ready, here are some videos from around the web about the famous Mid-Autumn Festival snack: [embedded content] A detailed guide to moon cakes from Off the Great Wall. [embedded content] This video from Tasty shows you how to make moon cakes. [embedded content] Practice listening and learn how to make moon cakes in this video from Magic Ingredients. [embedded content] Sing along in Mandarin to the song “Moon Cakes” from the Netflix movie “Over the Moon.” I hope you found this post informative and fun, and that you are able to enjoy some moon cakes yourself on this traditional Chinese holiday! Let us know which flavor is your favorite in the comments below. To all of our readers, I’d like to end this post by saying… 中秋节快乐!zhōng qiū jié kuài lèHappy Mid-Autumn Festival!

The Mid-Autumn Festival is also called the Moon Festival or the Mooncake Festival. It traditionally falls on the 15th day of the eighth month of the Chinese lunar calendar, which is in September or early October on the Gregorian calendar.

In 2021, the Mid-Autumn Festival falls on September 21st (Tuesday). Chinese people have a 3-day public holiday from September 19th to 21st.

A “mid-autumn festival” is also celebrated in many other Asian communities besides China. In China, it's a reunion time for families, just like Thanksgiving, while in Vietnam, it's more like a children's day.

The Mid-Autumn Festival is the second most important festival in China after Chinese New Year. Chinese people celebrate it by gathering for dinners, worshiping the moon, lighting paper lanterns, eating mooncakes, etc. How the Chinese Celebrate Mid-Autumn Festival How the Chinese Celebrate Mid-Autumn Festival

As the second most important festival in China, Mid-Autumn Festival is celebrated in many traditional ways. Here are some of the most popular traditional celebrations.

The roundness of the moon represents the reunion of the family in Chinese minds.

Families will have dinner together on the evening of the Mid-Autumn Festival.

The public holiday (usually 3 days) is mainly for Chinese people working in different places to have enough time to reunite. Those staying too far away from their parents’ home usually get together with friends.

Mooncakes are the most representative food for the Mid-Autumn Festival, because of their round shape and sweet flavor. Family members usually gather round and cut a mooncake into pieces and share its sweetness.

Nowadays, mooncakes are made in various shapes (round, square, heart-shaped, animal-shaped …) and in various flavors, which make them more attractive and enjoyable for a variety of consumers. In some shopping malls, super big mooncakes may be displayed to attract customers. 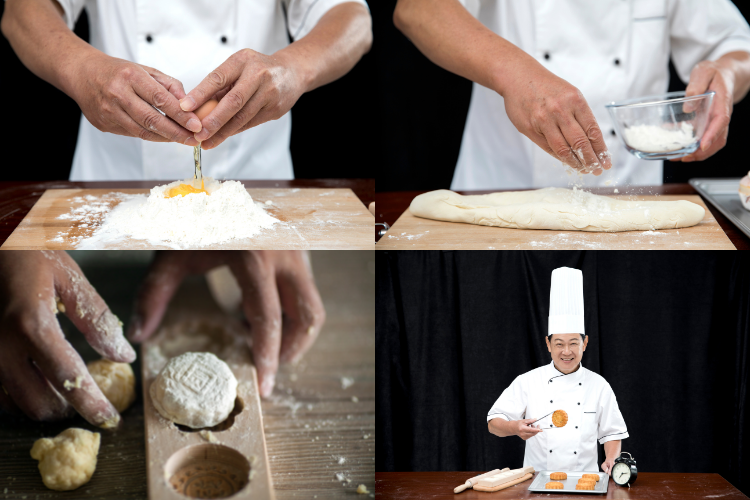 The full moon is the symbol of family reunions in Chinese culture. It is said, sentimentally, that “the moon on the night of Mid-Autumn Festival is the brightest and the most beautiful”.

Chinese people usually set a table outside their houses and sit together to admire the full moon while enjoying tasty mooncakes. Parents with little kids often tell the legend of Chang'e Flying to the Moon. As a game, kids try their best to find the shape of Chang'e on the moon.

Want to share the Mid-Autumn Festival story with your family? The 3-minute video below will show you all about it.

There are many Chinese poems praising the beauties of the moon and expressing people’s longing for their friends and families at Mid-Autumn. According to the legend of Mid-Autumn Festival, a fairy maiden named Chang’e lives on the moon with a cute rabbit. On the night of the Mid-Autumn Festival, people set a table under the moon with mooncakes, snacks, fruits, and a pair of candles lit on it. Some believe that by worshiping the moon, Chang’e (the moon goddess) may fulfill their wishes. This is children's favorite activity. Mid-Autumn lanterns have many shapes and can resemble animals, plants, or flowers. The lanterns are hung in trees or on houses, creating beautiful scenes at night.

Some Chinese people write good wishes on the lanterns for health, harvests, marriage, love, education, etc. In some countryside areas, local people light lanterns that fly up into the sky or make lanterns that float on rivers and release them like prayers of dreams coming true.

In modern times, besides the traditional activities, many Chinese people send WeChat red envelopes and/or go traveling during the 3-day public holiday to celebrate the festival. Besides the above common celebrations, different regions also have some unique traditions. For example, in Hong Kong, an annual fire dragon show is held in the Tai Hang neighborhood during Mid-Autumn Festival.

Mid-Autumn Festival Is Also Celebrated in Other Asian Countries

In many Asian communities besides China, the Mid-Autumn Festival is widely celebrated. Many interesting activities with unique local features are held.

In Singapore, Malaysia, and the Philippines — three countries with many ethnic Chinese citizens — the celebrations are more Chinese, such as lighting lanterns and dragon dances. The date is also the same as in China, but there is no public holiday.

In other countries, such as Japan, South Korea, and Vietnam, which have also been influenced deeply by Chinese culture, new celebrations have been derived from their unique cultures. Mid-Autumn Festival is a pleasant time. Many Chinese people send e-cards or short messages during the festival to express their best wishes to family and friends. The most popular greeting is ‘Happy Mid-Autumn Festival’.

Other popular sayings are usually related to the moon or reunion. For example: During Mid-Autumn Festival, people love to give gifts to their loved ones, friends, parents, other relatives, and staff. Mooncakes are the top option among all gifts.

In recent years, mooncakes have been made in various shapes to make them attractive, like animal shapes, flower shapes, love heart shapes, etc., but round mooncakes are still loved by most people for their reunion symbolism.

What Food Is Eaten during Mid-Autumn Festival Mooncakes are the must-eat Mid-Autumn food in China. They are a traditional Chinese pastry. Chinese people see in the roundness of mooncakes a symbol of reunion and happiness.

Other foods eaten during the festival are harvest foods, such as crabs, pumpkins, pomelos, and grapes. People enjoy them at their freshest, most nutritious time, and enjoy their auspicious meanings that are particularly associated with round foods.

Does the Moon Look Biggest at Mid-Autumn Festival?

Actually, a supermoon (when the moon is closest to the Earth) is no more likely to occur at Mid-Autumn that any other time of year.

1. When Did Mid-Autumn Festival Become a Festival?

Mid-Autumn Festival has a history of over 3,000 years. It was derived from the custom of moon worship during the Shang Dynasty (c. 1600–1046 BC). Long after that, it was first celebrated as a national festival during the Northern Song Dynasty era (960–1127).

2. Why Mid-Autumn Festival Is Celebrated?

In the past, Mid-Autumn Festival was celebrated at harvest time. Ancient Chinese emperors worshiped the moon in autumn to thank it for the harvest.

Ordinary people took the Mid-Autumn Festival to be a celebration of their hard work and harvests.

Why Is Play Important for Your Child’s Chinese Learning?

9 Simple Ways to Give Compliments in Chinese | Beyond Basic...