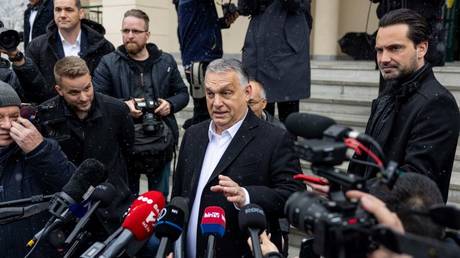 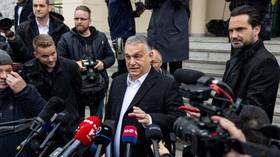 Hungary’s Viktor Orban, fresh from winning a fourth term as prime minister in Sunday’s election, said his party was victorious despite facing interference from left-wing forces at home and “opponents” around the world, including Ukrainian President Volodymyr Zelensky and billionaire political activist George Soros.

“We have such a victory, it can be seen from the moon, but it’s sure that it can be seen from Brussels,” Orban told supporters on Sunday night, alluding to his party’s clashes with EU leaders. “We will remember this victory until the end of our lives because we had to fight against a huge amount of opponents.”

Those forces included not only Hungary’s own opposition parties, he said, but also “Brussels bureaucrats, the Soros empire – with all its money – the international mainstream media, and in the end, even the Ukrainian president. We never had so many opponents at the same time.”

Orban's Fidesz-led coalition has crushed a six-party opposition bloc in Sunday's elections, and with over 90% of votes counted is projected to secure enough parliament seats for yet another constitutional supermajority.

“The entire world can see that our brand of Christian democratic, conservative, patriotic politics has won,” Orban declared.

In the run-up to the election, Orban was portrayed as “pro-Putin” by opponnets and Western media outlets, after he resisted pressure to take a stronger stance against Russian President Vladimir Putin over Moscow’s attack on Ukraine.

On the eve of the election, Zelensky took time out from defending against Russia’s military offensive to complain that Orban had failed to condemn Putin or aid Kiev’s war effort.

“He is virtually the only one in Europe to openly support Mr. Putin,” Zelensky claimed.

Orban has tried to keep Hungary out of the conflict, saying that sending weapons to Ukraine would make his country a target for Russian retaliation. He also has resisted pressure to sanction Russian oil and natural gas, saying Hungary has no alternative suppliers available to meet its fuel needs.

“This isn’t our war, we have to stay out of it,” Orban said during a campaign rally on Friday. He added that “Zelensky is not voting today,” and that “Putin isn’t running in the Hungarian elections.”

Ukraine wants $2bn per month from US

THE COMING GLOBAL MARKET COLLAPSE: Why Protect Wealth In...

The overwhelming majority of the market and even precious metals investors still...

No traction for a war-ending deal in Ukraine

As the US celebrates its Memorial Day weekend, remembering its fallen war heroes,...

The Most Bullish Precious Metals Setup In 38-Year Career

Gold will always act as a safe haven, except when investors are trying to… Peter...

Chinese state researchers are calling for the development of anti-satellite capabilities... In October 2020, six months after Wuhan emerged from a strict lockdown of 76 days,...